To be exact, the time upon writing this post was the exact time when President Elpidio Quirino signed the city charter last June 15, 1050. Actually, it was introduced by the new Congressman Emmanuel Pelaez on December 17, 1949- a House Bill No. 54 "An Act Creating the City of Cagayan de Oro".

Thanks to these people who made possible of creating Cagayan de Misamis to Cagayan de Oro City (that includes Congressman Pedro Baculio-1946). Don't you know why the name "Cagayan" was appended with "de Oro"? It's because they gave recognition to gold mining in the hinterland barrios known to Spanish explorers in 1500s.
So happy to be a part of another event, as well as our office... 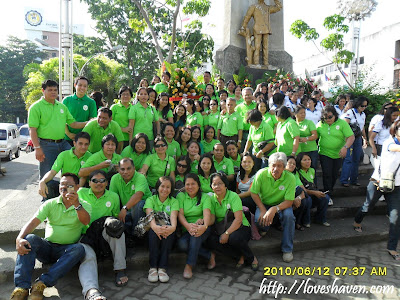 the whole office as we laid our wreath to the monument of JR Borja!

Happy Charter Day To Us Sis!