The city of golden friendship always celebrates its city fiesta every 28th of August yearly. One of their most highlighted activity was the Golden Float Parade. Aside from that, the city is known also for its fluvial parade, street dancing and of course the search for Miss Cagayan de Oro. But the most exciting was, PGMA declared our city fiesta as a Special Non-working Holiday.

The Golden Float Parade happened before the city fiesta. The theme for this year was Tabo sa Kagayhaan. Our agency was one of the competing float for this event among the 11 participants.

Here are the winners:
1st prize goes to SM City 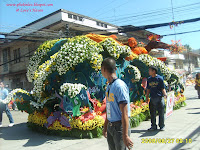 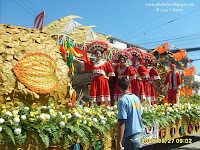 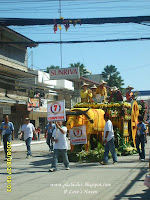 2nd runner up goes to Ororama
3rd prize goes to....our agency:
Dept. of Agriculture (with a cash prize of P50,000)
Sad to say that we spent 75,000 for that float. Anyway, we're not there to win, but to take part!
No comments:
Email ThisBlogThis!Share to TwitterShare to FacebookShare to Pinterest
Labels: parade

This is a tag from Bogie . Thanks so much for this tag. I've been busy nowadays with my new assigned works, that's why no much time for blogging :)

Here are the rules:

1.) List down the household chores you hate and why. Do you think you can survive without helpers and nannies?

3.) Tag as many girlfriends you want, the daddies and hubbies can also join.

4.) Add your blog’s link in the domesticated divas linky love. You can add all your blogs.

DOMESTICATED DIVAS: Living the Healthy Life / Sripe&Yellow / Vanity Kit / Mind Bubbles / Something Purple / Em’s Detour / Me,Myself+2 / Kidd Designs / FunFierceFabulous / Ozzy’s Mom / Insights from the Grocery Cart / Living A’ La Mode / God’s Best Gift / MommyAllehs Up-Close And Personal / My Precious Niche / Just Me.. Eds / Eds Mommy Life / Aggie Shoots Aggie Scraps / All Kinds of Me Stuff / The Salad Caper / Winding Creek Circle / InkBabyStudios /Joys in Life / Me and Mine / Little Peanut / Creative in Me/ Pea in a Pod / Sugarmagnolias / Notable Bistro / Around the World / My Wonderful Life / Anything and Everything in Between / Designs By Vhiel / Vhiel's Corner / Can of Thoughts / A Mother's Stuff / http://housewifeatwork.blogspot.com/ / Irresistible Fascinations / The Treasure Chest / Bogie's Wonderland/Love's Haven/
Your Blog Is Next
My answers:
1. Household chores that I hate:

2. Do you think you can survive without helpers or nannies?

Of course I can survive! I grew up having no nannies at all! My mom is always there beside us as we grow older until now. I can really count on her because she doesn't want me to get a nanny for my baby. Thank God she's my nanny (joke!!!). But as my little daughter is now getting older and so makulit I think I need to have one.

Now I am tagging anyone out there!

No comments:
Email ThisBlogThis!Share to TwitterShare to FacebookShare to Pinterest
Labels: tags

Ever since I was a kid, I always wanted to be a wedding planner. I am really a frustrated one until now. Even my own big Event was just planned by myself but it turned out to be not as perfect that I wanted to happen. Anyway, but I do believe in the saying that there’s no such wedding as perfect. The bride most of the time is always late for the reason of Grand Entrance effect (LOL).

I have an ideal wedding plan in mind but I can’t use it anymore since I already tied my knot 3 years ago. Still, I do have 2 sisters left so I guess I can use it for their future big days in life. I won’t stop hoping to be such until I can call it on my own that I have planned that wedding. I know this is not an easy task to coordinate an event but it’s some kinda’ fulfilling to see the outcome especially if the event is a successful one. Right?

No comments:
Email ThisBlogThis!Share to TwitterShare to FacebookShare to Pinterest
Labels: frustrations, Wedding As a working parents, it is very hard for us to spend a quantity time with our little girl. Every after office hours, we see to it that if no over time works to be done we will go home early so that we could spend quality time with Danielle. Sometimes we went home late at night for some activities to attend at church and even at our work place. I felt so guilty at times wherein we could not spend even a single time with her cause she's already asleep when we arrived home. We will wake up early to prepare ourselves for office and then kiss her and bid goodbye while she's still sleeping. So on and so forth...(routinary works) Thanks God that my work is every weekdays only. I could spend the rest of my weekends for my baby. Sad to say that my husband could stay at home during sundays only. Last saturday at around 5pm I was so thankful that we spent our quality time with her. We went to have swimming at the beach and so nice to look at that they have spent together with his dad. Sunday came, we went to have strolling in the mall for her to explore the outside world since she stays at home the whole weekdays.
Having enough time with our baby doesn't mean that we already have quality time with her, we still need to be with her while she watch educational DVDs, loves story telling, playing with her, singing and dancing is her forte so I will give enough time to practice with her.