April 12 of 2008 was a memorable day that happened in my life. Guess what? I was able to see Don Moen for the first time in person for a live concert here in our city. Although it was expensive and yet worth the pay! I and hubby watched it and we really enjoyed and felt the presence on how the Holy Spirit moved in that place.
Speaking of concerts, I have attended few concerts but the one 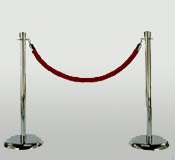 with Don Moen was a different one. I mean it was just so ordered that even their crowd control really helped the people stayed in their lines as they line up in going to the stadium. Not only that they also used stanchions and velvet rope for the people not to go near the stage and barricades were also placed outside the area just to maintain the flow of the traffic. Indeed it was a successful concert!

Oh my! I really miss going to concerts at this time. Surely I would love to see if Mr. Benny Hinn would have his evangelism crusade here in our city. How I wish I could see him in person too!