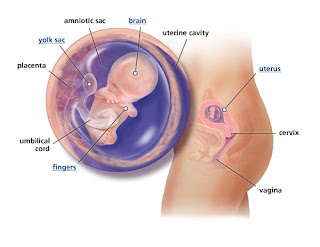 Our fetus is only about 1.2 inches / 3 centimeters long from crown to rump and weighs less than a sixth of an ounce / 4 grams. Even so, it's busily swallowing and kicking. Each day more minute details start to appear, such as fingernails and peach-fuzzy hair.
The vital organs - the liver, kidneys, intestines, brain, and lungs - are fully formed and functional, while the head is almost half the length of the entire body. The forehead temporarily bulges and sits high on the head, but later will change into a more human-like feature.

By the end of 10 weeks, our baby will have moved past the embryonic period and will begin the 'fetal' period. The fetal period is the time when our baby will undergo rapid growth. By week ten, our baby is less at risk for congenital malformations (physical birth defects), which usually occur during the first nine weeks of pregnancy. I should breathe a big sigh of relief by the end of pregnancy week 10!

Thank you Lord for such a wonderful workpiece!
Email ThisBlogThis!Share to TwitterShare to FacebookShare to Pinterest
Labels: 10 weeks pregnancy, pregnancy